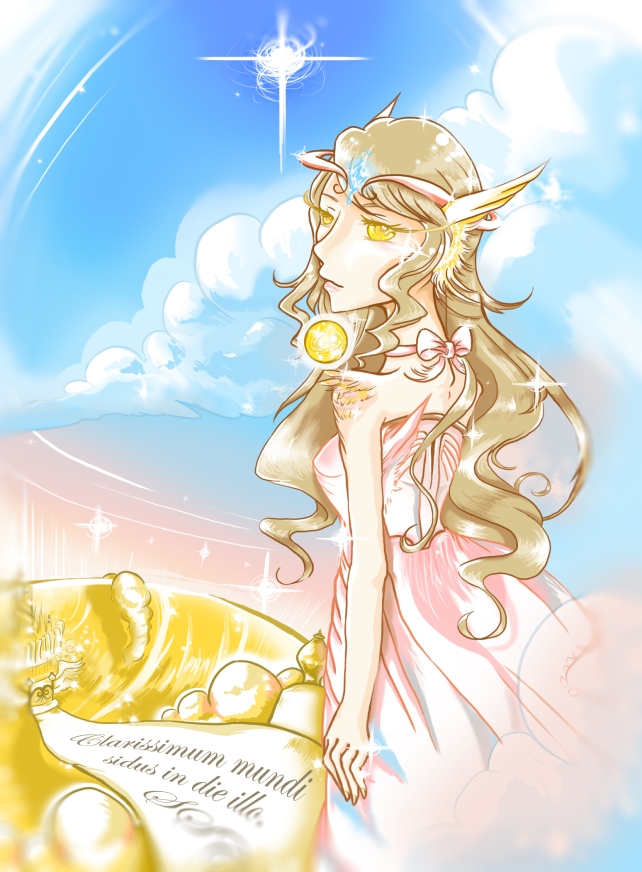 Seraphemia Sweetsilk Celestiara is a spinoff of the word seraphim who are associated with “light, ardor, and purity.” Her former name was Seraphemia Sweetfrost; her surname is a combination of sweets (sweet, frosting) and frost (frosting pun intended) as in ice, which is also inclusive within the Warriors nomenclature. Her surname changes to Sweetsilk Celestiara to mark both the in-game achievement and character lore.

❀ Seraphemia is a non-actualized Aasimar up until her final incarnation. Because Aasimar are part human, part celestials, it is common for many of them to believe they are human until self actualization. Click here for more information regarding her lineage.
❀  Seraphemia’s mother was a true aasimar herself (half human, half celestial) while her father was a celestial hybrid (half eladrin, half solar celestial). This highly unique gene pool grants Seraphemia more celestial like traits suppressed by her partial human blood. Her parents’ faith in the Silver Flame, which was influenced by the Silver Flame itself, was passed down to Seraphemia at a young age before their passing.
❀ Seraphemia’s appearance changes entirely when she transforms into her celestial form (Good Outsider): her eyes shine a blindingly luminescent white; emanates white light from within her body; her hair becomes a wavy platinum blond that extends past her knees, slightly levitating; her skin, when not illuminated by the inner light, shines pure white with a metallic silver sheen, and she gains celestial traits to her appearance such as rose-gold wings and feathery eyelashes.
❀ Seraphemia’s standing form looks strikingly convincing as a human, despite the greater celestial blood in her gene pool. This is because of the “impurity” of the human blood that carries dominant from her mother’s lineage. Her celestial blood shows traces of itself through distinct characteristics: an unusually petite figure; feathery eyelashes and covered shoulder-tops; softly glowing amber eyes; slightly levitating and feathery hair; porcelain skin with a metallic silver sheen; a “voice that carries the soft echoes of bells,” feathery white eyes (see Reaper White Eyes); and a pair of ethereal wings — up to three pairs depending on the form (all listed features can belong to one or a multiple of her forms).
❀ After self-actualization, Seraphemia changes her surname to mark her newly found self (Seraphemia Sweetsilk Celestiara).
❀ Because of her faith in the Silver Flame, her archery skills are surprisingly accurate. Her religious favored weapon, the longbow, allows her to summon a celestial feather bow that has a rich rose-gold platinum layer that strengthens the pure blessed silver material underneath.
❀ Seraphemia loves sweets, particularly pudding pie and anything red velvet.
❀ Seraphemia’s lantern archon companion is named Brilliance.
❀ Personality traits: serene, reserved, gentle, charismatic, radiant, merciful, commanding.

The part celestial angel who was the first to enter Chronias of Mount Celestia and return as a holy, pure soul. Rather than joining the essence of the plane, she embodies an aspect of it, and thus has finally found her true identity and purpose: to become the beacon of light and warmth for the one who has fallen into the deepest of darkness, to the point of no return. There was always hope as long as the two were together — the essence of light and darkness encompassing perfection.

“The best way to seek Light is to start from your shadow.”